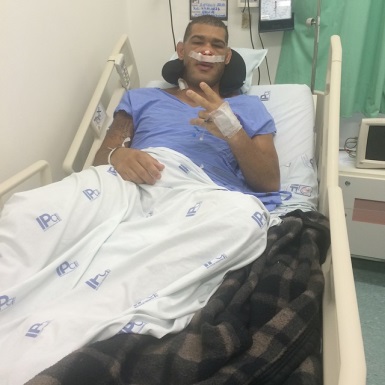 Mixed Martial Arts (MMA) fighter Antonio Silva had transsphenoidal surgery in Sao Paolo, Brazil in late September to combat a recurrence of a pituitary tumor causing acromegaly, according to an article in MMAfighting.com. The site also quotes his manager, Alex Davis, as saying "The surgery was a success. It's a head surgery, so it's always complicated. They had to access the gland under the brain through the nose, so it's not a simple surgery – especially for a fighter, who gets punched in the face for a living." Silva was knocked out in a recent fight. Davis said, "He should get cleared to train again in two months," Davis said. "I think he will be ready to fight in five or six months. He wants to fight again. He's disappointed with his last fight."

According to Silva's Wikipedia page, the fighter underwent his first surgery in the summer of 2007 after pre-fight medical tests lead the California State Athletic Commission to deny Silva a license to fight. Silva, whose fighting nickname is "Bigfoot," posted a post-surgery photo to his Instagram account. ilHe took to his twitter feed to proclaim the surgery a success and announced that he'll return to the ring after he recuperates at home. Photographs from the ring clearly show an overextended brow and elongated jaw, which are common in acromegaly. An analysis on the site MMA Torch speculates that Silva's career depends on his success in fighting acromegaly. According to Wikipedia, Silva has been on testosterone replacement therapy and has been accused of steroid use in the past when his HRT triggered adverse results in drug tests.

The print version of the Pituitary Patient Resource Guide is now available! A one of a kind publication intended as an invaluable source of information not only for patients but also their families, and all health care providers. It contains information on symptoms, proper testing, how to get a diagnosis, and the treatment options that are available.